Connecting with Purpose: How SVPP Changed Our Lives 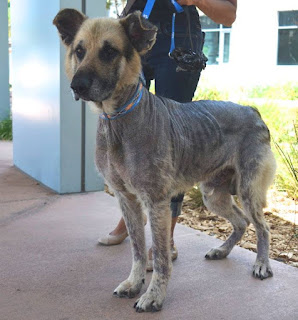 My husband and I had recently lost our beloved German Shepherd when we were contacted by a
friend who fosters animals for Silicon Valley Pet Project (SVPP). Not being able to stand having a
quiet household, and missing the companionship and unconditional love that comes with having
pets, we scheduled a visit to meet Ranger. 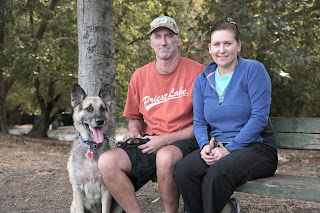 What we found was a German Shepherd who had no hair. His skin was oozed. He had urinary
bleeding which left drops of blood everywhere he went. His teeth were worn down and he had other dental issues from trying to bite his way out of a cage or fence. Ranger was so skinny that his ribs stuck out and his head looked disproportionately large for his shrunken body. His back legs were buckled/atrophied, which was probably from lack of use. When he was picked up from the shelter by his foster parent, he had a yeast infection on his entire body which caused him to smell terribly.

At first, it was weird seeing such a large animal without hair. However, hair or no hair, it was pretty much love at first sight; we just couldn’t say no to his adorable fluffy face and charming personality. 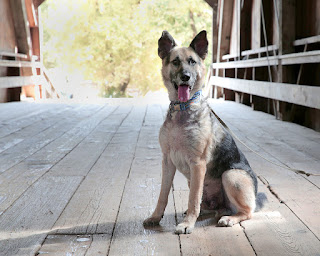 He had been turned into the shelter because a neighbor reported the abuse they saw: He was saved from euthanasia at the shelter by SVPP. At first he didn’t seem like an adoptable dog on the outside but SVPP saw something special in him.

The SVPP foster parent immediately took Ranger to a vet to put him on a plan to get healthy. He went on skin meds and took daily medicated baths. He was neutered which stopped the urinary bleeding, and by adding a regular exercise plan that included hiking and playing around the yard, he now has a beautiful stance.

With regular vet checks and LOTS of love, Ranger proved to be a beautiful, loyal, ADOPTABLE, German Shepherd within a month.

One year later, our home feels like home again; filled with Ranger’s unconditional love, charming and playful personality. His hair is still coming in and getting thicker by the month, earning him the proud nickname of Mr. Fluffy. He is such a great companion, keeping us company during our hikes, road trips and when we are simply hanging out at home. Ranger has made such a great impact on our lives, and I’m even more grateful that we could provide him with the love and care that all pets deserve.

Editor's Comment: This is the fifth of our series of "SVPP Adopter's Stories" about how their adopted pet came into their family and changed their lives. We encourage all of our adopters to share their stories with us by contacting us at info@svpetproject.org.