A Leap of Faith 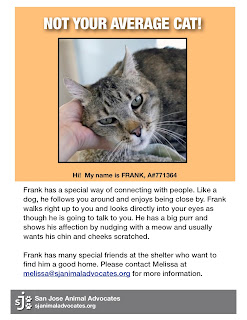 My husband, Jeff, and I adopted Frankie in July 2012.  It was a leap of faith that changed our lives.

We weren't looking for another cat. In fact, we already had three older tuxedos in our small Redwood City home. Rather, we were staffing a fundraiser for San Jose Animal Advocate — a "yard sale" in a public school parking lot. Event staffers chatted near us and I overheard a conversation that was meant for me.

“I’m worried about Frank,” said a San Jose shelter volunteer. Frank was a middle-aged and somewhat scruffy tabby that had been adopted twice from the shelter but returned both times.  The volunteer was not sure he would find another home; he was “at risk” in the shelter. “We are returning him because he doesn’t get along with other cats,” his previous owner noted on Frank’s surrender card. 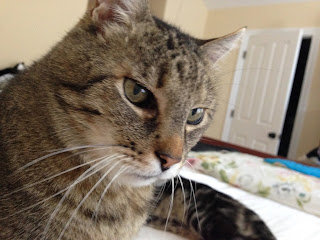 Frank tugged at my heart.  For a week, the worried voice inside me would not subside and I we knew we had to rescue him.  We didn’t meet him; we had SJAA pull him from the shelter and took him home site unseen. Literally, a leap of faith.

Given Frank’s surrender card, we didn’t know what to expect.  We didn’t want to create chaos in our home or upend relationships our tuxedos had created with each other and us. We gave Frank lots of time and space to feel safe, and gave everyone the room to get acclimated.

It turned out to be the perfect fit. 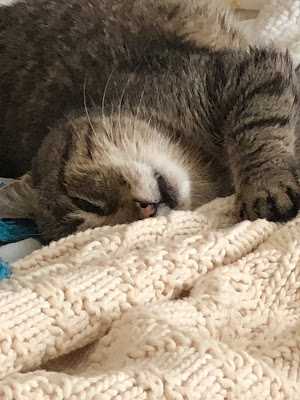 Frankie is one cool cat. For the seven years we’ve had him, he’s been amazingly content. He's perfectly happy to observe feline drama from afar and let others hash it out.  He’s friendly with the other cats, but is not interested in a joust. He’s easy going and follows us around the house like a dog. He rouses a crazy loud purr for an ear rub or a treat.  He bathes in the sun, lays up against any warm body part and lets us know when it’s time for bed. He’s dogged (pun intended!) when it comes to meals and is adamant about breakfast time. Even at 5:30 a.m., I still find the soft wake-up tap on my nose disarming.

Frank’s intense and beautiful almond-shaped eyes become almost round when he wants something. His ears attest to his past. One clipped ear shows a shelter neuter when he was a stray; another soft, jagged edge recounts time in a feral colony where he was dumped by a previous owner. You would never know he has physical or emotional scars. Even through his recent and serious medical problems – diabetes and chronic kidney disease, and a slower pace hampered by arthritis – our Frankie boy is always ready for a Greenie and a hug. 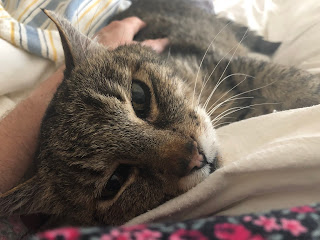 Early on, Frank did have a behavioral issue with which we had some expert (and celebrity) help.  He could be quick to bite, for example, when hands were unexpectedly too close to his face.

“He was probably tormented or hurt by someone’s hands when he was young,“ Jackson Galaxy told us at a Best Friends Conference.  “The biting is a defense mechanism. Don’t ever tease him with your hands and don’t use your hands as something he should play with. Most importantly, always let him know that he’s safe.”
We did exactly as Jackson recommended and Frank’s behavior issue softened over years filled with love, affection and security.

Our experience with Frank has inspired us to love and adopt other homeless and unwanted at-risk pets.  It’s the new norm in our home and a practice we advocate broadly. For information on adopting at-risk pets from the San Jose shelter, please go to the San Jose Animal Care Center’s website at www.sanjoseanimals.com. Click on Adoptable Pets, and when you are on the cat or dog page, click on Special Needs animals.

Karen Zamel is a long-time SVPP volunteer and is now a member of the communications team.

Posted by Karen Zamel at 9:41 PM No comments: