SVPP volunteer, Laura Brown, is fostering kittens for the third season this year.  It’s been a life-affirming experience for her and she has been kind enough to share her story with us.

first rescue when she was an undergrad at UC San Diego — a ginger cat named “Trouble.”  Laura and Trouble moved many times together over the years and finally ended up in San Jose in 2016.  Then, Trouble’s health began to decline and she was diagnosed with diabetes.

“By 2018, I realized we were living on borrowed time, and I wanted to foster kittens to keep my spirits up. Luckily, I have a spare bedroom that became the Kitten Room though, because Trouble was a terrible hostess and I had to keep the kittens out of her sight to keep the peace in the house!”

Laura fostered weaned kittens for her first two years with SVPP and had a great experience. When COVID-19 hit, Laura began working from home and she decided to take on some bottle babies.

“I was excited, but nervous, too. I thought I could ease my way into the world of neonates with a mom and babies, since the mom would help me do most of the work,” Laura said.

Unfortunately, the normally simple situation turned out to be a serious and heartbreaking experience, as the young mother became very ill and most of the neonates did not survive.

“Any loss in rescue work is sad. It happens and we know it’s a possibility when we sign up, but when you put so much love and effort into these tiny creatures…it breaks your heart to hold them in your hands and lose them.”

After a few of her most challenging weeks as a foster, and while managing Trouble’s declining health, Laura felt the need to take back some control. She purchased an incubator and rearranged the Kitten Room to be a more functional rescue space.  King Pete, the sole survivor neonate, took residence in the cozy new incubator and  became Laura’s first foster fail near the end of June.

“Watching Pete grow and thrive after losing his siblings felt like such an accomplishment. He stole a huge piece of my heart despite my best efforts not to get attached. And Trouble was always there to snuggle me for as long as I needed when I was physically and emotionally exhausted from dealing with sick kittens. Things really came around full circle when it was Pete left here to comfort me when I lost her in August,” Laura said. 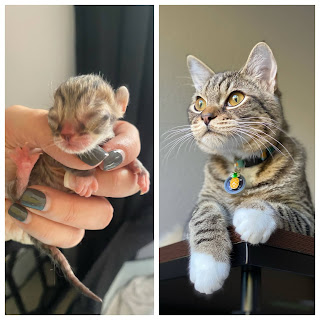 It was a record season for SVPP, with many successful adoptions and Laura added to her running tally of 49 total fosters since 2018.

The season ended just as dramatically as it started.  In August, three kittens (out of ten in Laura’s care at the time) were diagnosed with Panleukopenia. After a few more intense weeks of critical care, two of the three infected kittens survived and they were Laura’s last two adoptions of the season.

“I’m so proud of these survivors. It’s been a crazy year in all respects and I’m sad for each life lost, but I’m happy we saved so many more. The experience I gained, even though it was hard, was invaluable and will surely help me save more little lives in the future.”

Laura will be moving back to San Diego next year with King Pete, but she plans to continue her work in rescue as soon as she settles in.

We are grateful to Laura for everything she has done for SVPP — and for helping us save so many fragile, vulnerable and amazing lives.

Posted by Karen Zamel at 2:16 PM No comments: