We are Strutting for Sage! Strut Your Mutt Continues Until October 24! 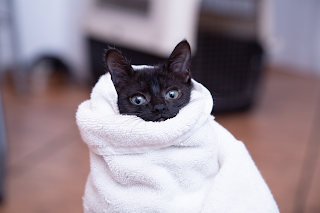 SVPP has rescued 173 kittens so far this year and many were orphaned, neonates or had other special needs.  But read on.  You’ll see why Sage — and her foster family — are so incredibly special.

SVPP rescued Sage and her litter mates when they were a week old.  At four weeks old, Sage became very ill.  Although initial symptoms subsided with fluids and antibiotics, her foster mom (a vet!) noticed that she wasn’t as playful as her litter mates and a disparity in growth was becoming painfully apparent.

After extensive testing, Sage was diagnosed with megaesophagus, a congenital condition where a cat’s esophagus does not contract and allow it to swallow food normally.  To save her life, Sage had to be fed at an upright angle so she could properly swallow and digest her food.  Her foster family wrapped her up like a burrito to aid the digestion process!  The incredible extra care helped Sage get the nutrition she needed to survive and thrive.

At about four months old now, Sage has gained weight and strength.  She is happy and growing!  She loves playtime (especially with her own tail), people and other pets. While she doesn’t need the burrito treatment any more, Sage will likely always have to eat at an angle (with her head higher than her stomach) and will likely require her daily medication for a lifetime.  She is available for adoption and this joyful, mischievous kitty will always need a little extra TLC.

Strut Your Mutt is our biggest fundraiser of the year and continues through October 24, 2020.  With your help, we can continue to rescue kittens like Sage and dogs like Star who need rescue, medical attention and foster care for a second chance and a “happily ever after” ending.
Karen Zamel is a long-time SVPP volunteer and is now a member of the communications team.
Posted by Karen Zamel at 11:45 AM